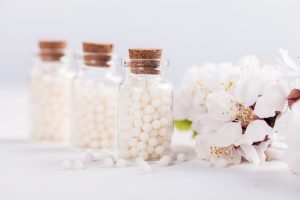 Founded in Germany over 200 years ago, homeopathy is a gentle and precise method of treating health concerns. Using minute doses of plants, minerals and animal substances, homeopathy stimulates the body’s innate healing process to restore balance. Through observation and detailed questioning, homeopathic medicine treats the person as a whole, rather than addresses a single health concern.

When I first entered naturopathic college, I didn’t know a thing about homeopathy.  All I had heard of was that it was an “energetic medicine,” something to do with “like cures like.”

I was probably one of the most skeptical students.

Out of my class that year, I was probably one of the most skeptical students. Homeopathy aggravated me so much that I was considering quitting naturopathic college to go back to university into the Master’s program for which I had received a full scholarship.

I vividly remember my first homeopathic class.  My professor stated homeopathy used concentrations of substances beyond Avogadro’s number. To say I was confused was an understatement. I felt homeopathy was absolute hogwash.  Feeling panicked, I wondered if I made a mistake of going into naturopathic medicine. Sure, I could agree with the benefits of proper nutrition, healthy lifestyle, using herbs and some supplements. Traditional Chinese medicine had over 2000 years backing it up, so I’d swallow the idea that “the liver’s emotion was anger.” But, homeopathy? It didn’t have 2000 years. It had 200 according to our books.  And while many drugs today have less than 20 years backing them up, I still felt 200 wasn’t good enough. And it also used little balls of sugar? That got to me.

So, I decided to focus on subjects like anatomy, physiology, etc. and memorize what I needed for the homeopathic exams and move on.

But, I still couldn’t shake the idea of this “energetic,” flimsy-based (according to my viewpoint) medicine. In retaliation, I would bother my professors with articles written by physicists denouncing homeopathy. The professors would graciously and patiently listen and go through each point with me. And then they would tell me that I should probably start using homeopathy to understand it.

After one of my last meetings with my professor, our school was taking part in a “homeopathic proving” or experiment.  A homeopathic proving is where a “prover” takes a remedy without knowing what it does.  The prover then pairs up with another person who records their symptoms during the experiment.  I immediately became a prover.

Well, I was fully expecting this to be a bust, so imagine how surprised I was when I took my first dose of these little sugar balls and ended up with a headache within five minutes. I never get headaches and so was pretty shocked at this. I then had to record the exact nature of this headache.  The location, intensity, what made it better or worse, etc. were all important observations.

A few days later, I took the remedy again, and the same headache appeared. I found out more about the headache, like cold pressure made it feel better and it was over my right eyebrow.

The idea is that if a person is experiencing this type of a headache naturally, then the remedy I was taking would help to alleviate or cure it. Unfortunately, I now don’t remember the name of the remedy.  Honestly, I was just amazed that I felt something from homeopathy.

My next step was to go to the homeopathic college for a consultation.  I was asked a lot of detailed questions over my first visit and then given a remedy. I wasn’t told the name of the remedy so I could continue with my experiment with homeopathy.

On the subway ride home, I felt tired and stressed with the night of studying ahead of me.  Without really thinking, I decided to take my homeopathic remedy. About 20 minutes after taking the remedy, I looked up and noticed around me how tired everyone else was on the subway car. I, on the other hand, had a subtle burst of energy and felt uplifted. It was strange to feel so good at the end of a long day and I didn’t even remember I had taken the homeopathic remedy earlier.

Over the next few weeks I enjoyed more energy than usual. I also noticed I couldn’t stand being around coffee. If I tried to drink it out of habit, I felt jittery and agitated.

Later on at my appointment, I was very surprised to learn my homeopathic remedy was Caffea, otherwise known as Coffee. So, I had the energy from homeopathic coffee, and if I tried having more coffee as a drink, it would be too much for my body. And from that moment, I began taking homeopathy much more seriously, even doing a 3-year course in it with one of the best homeopathic doctors in the country.

And now, homeopathy is a large portion of my practice.

I am always excited when I find a homeopathic remedy that helps patients with their insomnia, anxiety, digestion, etc. Often, I see a well-selected remedy can help ignite the healing process much quicker than other naturopathic tools. It amazes me time and time again that these little pills can have such a profound impact on a person’s health and wellbeing.